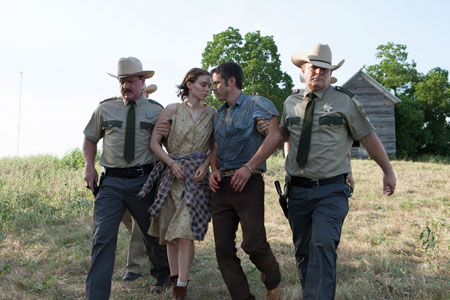 The title is just one of many intriguing aspects to this ballad-like drama of doomed love. Writer-director David Lowery has taken his elliptical storytelling and dreamy magic-hour light from Terrence Malick, but he brings something of his own to the slowly unfolding tragedy set in Texas hill country. Early on two young outlaws, Bob (Casey Affleck) and Ruth (Rooney Mara), are cornered in a shoot-out with the police. Ruth wounds a deputy, but Bob takes the rap for her and goes down. Four years later, Ruth is bringing up their daughter when news comes that Bob has broken out of jail – but is it too late?

[…] the bruising beauty of Ain’t Them Bodies Saints gets under your skin.