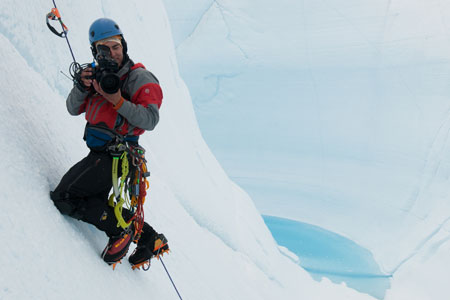 Jeff Orlowski’s documentary begins as a straightforward biographical profile, before shifting up into something more urgent, impassioned and compelling. Its subject, James Balog, is a photographer who goes to extremes to prove the existence of global warming: his latest expedition involves descending Arctic cliff faces to fit time-lapse cameras with which to monitor glacial erosion. The cameras look on in vain as massive ice sheets shear off, leaving once-mighty glaciers – characterised in the manner of the endangered species in Attenborough documentaries – to slump into the sea. Behind them, they leave nothing – save colossal insurance premiums for those areas subsequently flooded by displaced waters. If any film can convert the climate-change sceptics, Chasing Ice would be it: here, seeing really is believing.

With Chasing Ice, Balog and Orlowski have made not only one of this year’s finest documentaries, but also one of the most gently persuasive, user-friendly discourses on climate change to date. Whilst the elusive Best Documentary Feature Academy Award (for which it’s made the shortlist) may escape a film so passionately focused on one defined viewpoint on a hugely divisive sociopolitical issue, even sceptics may find their horizons ever so slightly expanded by this powerfully visual, ‘tip of the iceberg’ think piece.