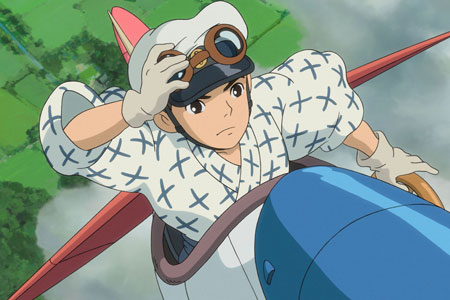 Mr. Miyazaki remains enchanted with the idea of being airborne, which animation freely lends itself to, having sent little girls, castles and even swine into flight. The Wind Rises, his newest film, tells the fictionalized story of Jiro Horikoshi, a gifted aeronautic engineer who is historically notable — or infamous — for designing deadly warplanes used by Japan in World War II. Mr. Miyazaki’s lyrical chronicle of the inventor’s creative process and his poignant romance reminds us that staying aloft is a fraught endeavor.

The great fantasist of contemporary animation celebrated for subject matter that has great appeal to children, Miyazaki has chosen to end his career with an inspired-by-history story that has adult relationships at its core.

Yet because this is Miyazaki, even the most realistic sequences, such as those dealing with the Great Kanto Earthquake and fire of 1923, are jaw-dropping visual knockouts. You can feel the care that goes into every hand-drawn frame here, and the emotion that conveys the director’s sense of wonder at the pleasures of the physical world.